The topic of vaccinations is high up in every one’s minds at the moment. But for our young Mastin, Ronald, it was a slightly more complicated intervention, last week! Ronald, Ronnie, Ron, Big Ron arrived at APROP in December 2019. He was very”shut down”, skinny and, understandably, scared. Through the dedication of some visitors and our volunteers, Ronald slowly began to come out of his shell. What emerged was a big baby – a playful, head strong young Mastin who enjoys his walks, thinks he’s a Podenco and loves belly rubs! In the almost 18 months Ronald’s been with us, it’s become increasingly clear that if Ronald doesn’t want to do anything or allow anything to be done to him, then there’s no room for negotiation! So, in order to administer his annual booster jabs and trim his long claws, there was no choice but to give him a sedative to allow the vet to do this.

Vets visit the shelter, weekly to keep all our canine and feline residents in check, so it was just a case of planning when to help Ronald get his jabs and clip his claws. The first dose wasn’t as quick acting as we’d hoped – still bright as a button after a couple of hours….Then, slowly, the drowsiness started and the vet was able to give Ronald an injection to ensure that the vet would be safe whilst treating Ron.

Eventually, Ronald  lay on the floor, gently cradled by one of our volunteers, Rachel, who had come to the shelter that morning, specifically to help him. The jabs and trimming of nails, complete, Ronald started to shake a little and we were scared that he was having convulsions. Luckily, the vet was still there and explained that this was normal. By the time the shift was over, Ronald was sitting up, watching the world go by and waiting for the next opportunity to try out those newly cut claws, tapping around the orange groves! 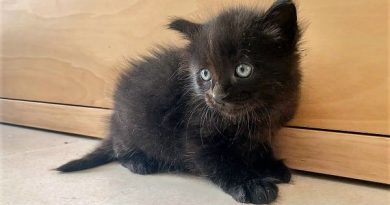 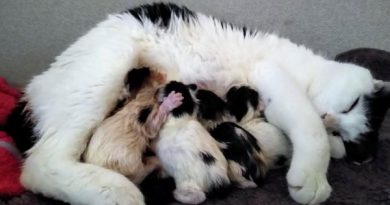 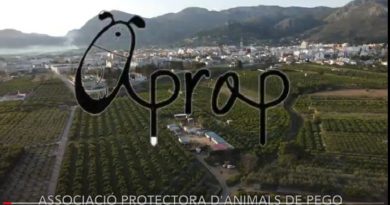 APROP from the air